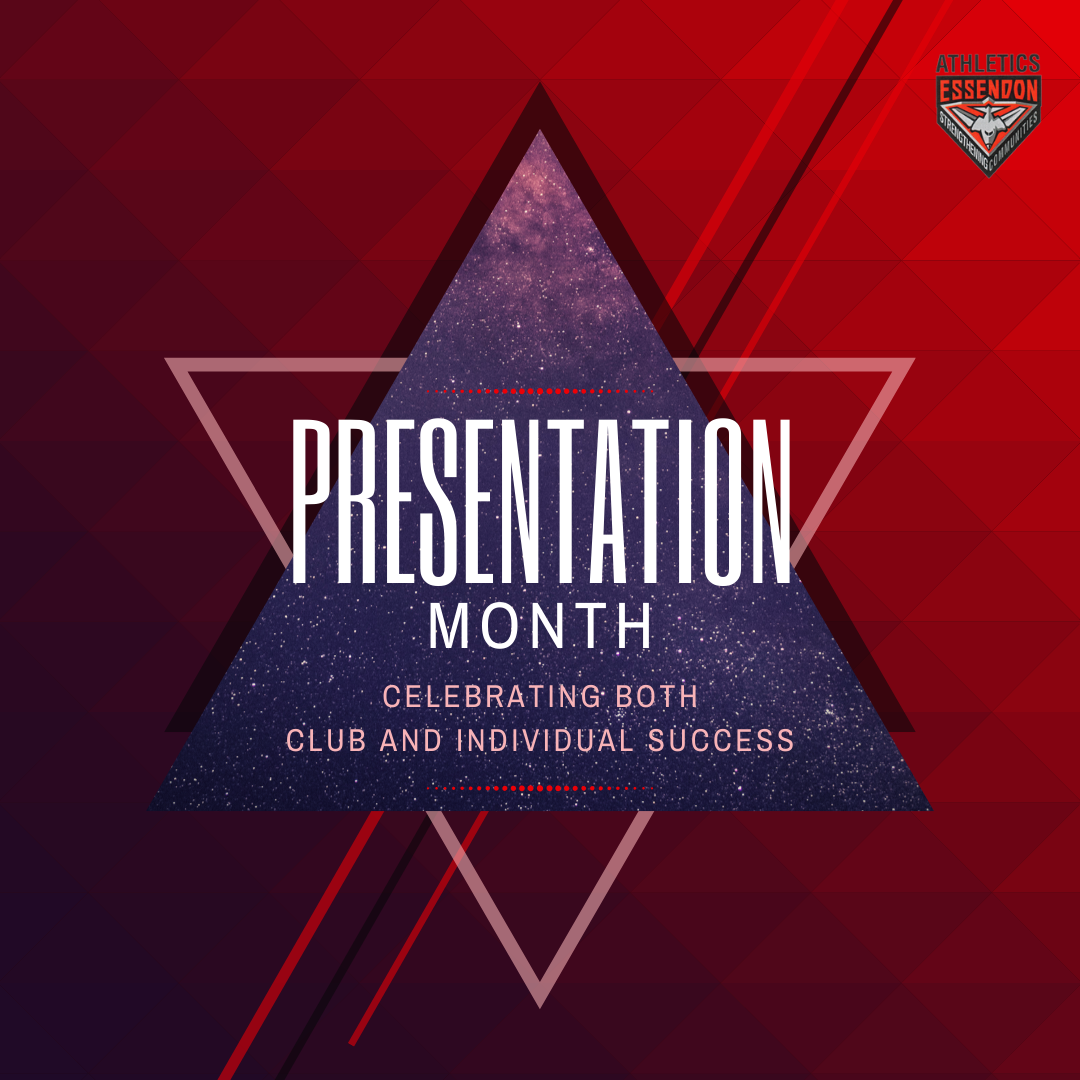 The season came to an abrupt end- but it was still full of comps and noteworthy performances.

This year- in lieu of presentation night, we’re bringing you PRESENTATION MONTH*.

20 Days to Celebration the Achievements of our members and Club.

Here’s a sneak-peek at the Schedule of Events:

*not quite a full month

Special thanks to Joanna Margiolis for the artwork

*MESSAGE FROM THE PRESIDENT*

Welcome to our Virtual Presentation month.

I would like to thank Moonee Valley Council for their ongoing support of Athletics Essendon, especially for our new track. The new track allowed us to conduct five Shield meetings during the summer which helped us pay some bills. We are currently getting improved bathroom facilities and look forward to more improvements in the next few months.

This time last year John Higham introduced me as interim president. It was with great sadness- both to the club and the wider athletics community- that we lost John to his illness in October. The club will always be here for his family. In his honour, we will support an annual 800m event at VMC and have also introduced a new award in his name for the best 400 / 800 runner of the season.

On the track it was a very successful result for the club winning the inaugural AVSL competition. We also won 35 medals at the Victorian championships to come second in the H.H Hunter Shield for most successful club at the States. Of course, the Nationals were cancelled, along with many other events which unfortunately brought an abrupt end the season for many.

A big thank you to the committee members for their hard work and commitment to our club. Congratulations also to our team managers and coaches for your well-deserved successes over the year.

Congratulations to all our award winners on your achievements over the season. To every member, you are part of a fantastic club with great facilities and coaches. Enjoy your sport.

In these difficult times- keep as fit possible. We will all come through this very soon and be back on track.

*MESSAGE FROM THE SECRETARY*

Congratulations to all members for a great year. Everyone has made a contribution to our club’s success.

I’d like to thank our club’s officials who spend long days out in all-weather to ensure athletes get to compete. A big thanks also to everyone who volunteered to assist the officials. Without these two groups we don’t have a sport. Going forward we need all parents and athletes do their bit for our sport to flourish.

A big thank you also goes to those members who helped set up our Aberfeldie events. We have all learnt many valuable lessons from Arthur over the past few months about the right and wrong way to set up and pack up.

Again, this year we managed to maintain our membership and remain one of Victoria’s biggest and most successful clubs. This will continue to be our challenge going forward in the next year or two.

There are a number of awards to be distributed over the next few days via our social media.

The Most Outstanding Athlete award will be presented to the athlete in each age division who attained the highest individual points score for any one event during the AVSL season AND competed in at least 4 rounds in order to qualify for the final round.

The Most Valuable Athlete award will be presented to the athlete who accumulated the greatest number of points over the AVSL season and who also competed at least 4 rounds.

The winner of the Arthur Whitchell award will be presented to the club person who has made a significant contribution over a period of time.

The John Higham award will be presented for the first time this year. To the athlete (male or female) who showed their versatility over 800m and 400m. This has been calculated using AV’s Score Buddy.

Senior and Junior Athletes of the Year are also awarded.

Congratulations to all our State medallists along with everyone who “had a go” – you are all winners!

To our members who were on the Road to Tokyo, let’s hope 2021 sees you in Green and Gold and doing your club and country proud.

The highest individual result by an athlete who also qualified for the Play Off.

The athlete, who, over the 12 rounds of the Home & Away season, accumulated the most points and was eligible for the Play Off round.

Hazel just beat off Charlotte Jackson. Hazel competed in 19 events over 9 rounds and competed in the triple jump in the Play Off for a further 500 points.

Ellie finished just in front of Amanda Wrout with a big last 2 rounds where she completed 9 events! Ellie was injured and couldn’t compete in the Play Off.

Emily was the standout team player throughout the season, competing in 33 events over 10 rounds. Emily competed in the 200, high jump, shot and triple for 1018 points in the Play Off.

Only 3 girls qualified for PlayOffs this season. Montana competed in 14 events over 9 rounds. She ran the 200 for 389 points in the Play Off.

This is the 3rd time Joanna has won this award. She competed in 48 events over the 12 rounds. She had a busy day at Lakeside competing in the 200, 800, shot and a relay as well as taking photos for our website.

A great first season back spoilt with a calf injury. Kim still managed 22 events over 9 rounds and managed to earn 395 points in the shot put. Kim also manned the high jump for a large part of the day helping the club fulfil our club’s duty.

Thomas competed in every round, completing in 39 events. He topped the team’s scores on 2 occasions. Thomas racked up 1300 points in the Play Off in the high jump, shot & triple.

Kevin competed in every round and scored more points than any other ESS athlete. He top- scored in 10 rounds and the Play Off with a massive 1577 points in the 200, hammer, shot, triple and a relay

Michael just beat off Matthew Burkhardt for the award. He competed in 15 events in 10 rounds. Michael also ran the 200, 800 and a relay in the Play Off.

Justin competed in 8 rounds and 36 events as well as helping with set up at Aberfeldie. Justin dominated the Open team with the second placed athlete only doing 9 events. Justin collected 541 points in the Play Off competing in the 800, 3K and shot.

One of the club’s busiest athletes with 47 events over 11 rounds. Brian also had a big day at the Play Off. He’d completed 3 events before most people had arrived at Lakeside, completing the 3K walk, high jump, 800m and shot for 1234 points