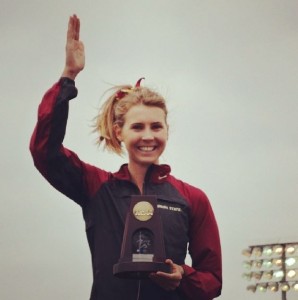 After achieving incredible success in the United States studying and competing in the Collegiate competition, Athletics Essendon 1500m runner Linden Hall is back in Melbourne to continue her athletics career. We caught up with her for a chat about her overseas adventure.

Thanks for having a chat with us about your time in the US, Linden! So, what led you to attend university in the US?

During high school I hadn’t really considered the possibility, as the US college system had a reputation for over-training and over-racing athletes. However, after noticing some impressive results coming from other Australians competing in the NCAA and talking to some of these athletes, the idea started to grow on me. It also began to look more appealing, as I was studying a pretty dry science degree at Melbourne Uni, working part-time and trying to train and compete. After ending up coach-less at the end of the 2011 track season, I decided heading to the US was an amazing opportunity that I would probably regret if I let it slide by. Not only in terms of athletics, but also the opportunity to live overseas, travel around the US and meet new people from all over the world. So, I accepted a scholarship to run and study at Florida State University, and flew off to Tallahassee in August 2011.

What were your expectations of university and athletics the US? And, now that you’ve finished, did the realisations differ from those expectations?

I was lucky enough to have been able to visit in April before I moved, so I was able to meet all the coaches and other athletes, and see the town and campus. In terms of competition, I found my first year really overwhelming and consequently underperformed. However, once I adjusted to the new environment my results definitely exceeded my expectations! The NCAA Championships, which are held in Eugene, Oregon each year, affectionately known as ‘TrackTown USA’ is by far the biggest and most exciting event I have ever competed in.

In terms of the ‘college experience,’ Florida State ticks most of the stereotype boxes. I definitely didn’t expect it to be as much like a movie as it was! There are giant sorority and fraternity houses; with matching parties of course, (American) football is indescribably huge and the whole school is star struck by the quarterback, though unfortunately he wasn’t dating the head cheerleader.

After a fantastic 2014 NCAA’s placing third in the 1500m, you had an injury plagued 2014-15 that kept you out of much of the competition season. What were your injuries and how did you manage to come from so far back to qualify for another NCAA 1500m final?

Finishing third at the 2014 NCAA’s was definitely the highlight of my time in the NCAA. But this year’s NCAA final, despite finishing eighth, I was just as happy as the year before but it came with a different sense of accomplishment. It was one of my most challenging seasons, and it was hard to believe I managed to pull off what I did.
I had missed all of the indoor track season due to injury, and felt like I was playing catch up all outdoor season! I had a very persistent case of bursitis and tendonitis in my hips. I was lucky enough to be able to work with our team physio and trainers daily on strengthening and rehab and did more running than I’d like to tally up on the Alter-G treadmill. The resources available at FSU and all the support from medical staff, coaches and my teammates helped enormously in keeping me motivated and get back just in time for the end of the track season!

You were already a signed up Athletics Essendon athlete for season 2015/16 even before returning to Australia! You must be pretty keen for some success this season?

I was, very keen! I was really excited to jump in for the Tan relays and be able to run a 14 second PB (12.48). Though you would hope so since my Tan PB was really old after being away for 4 years! But also certainly can’t wait for the summer season to start and to compete in Australia again. I haven’t even run at Lakeside yet, that’s how long it’s been!

That is a long time! So what’s the big goal for you this season?

Firstly I’m really excited to be back and see where I fit in with all the other Aussie girls, and really looking to being able to be really competitive across the AA Tour meets and of course Nationals! Really hoping to dip under the 4.10 barrier after getting so close last year! But the really big goal on my mind this year is to knock try and knock off another 4 seconds or so to hit the standard for Rio and put myself in contention for selection. So a lot of exciting things to come this season, and I’m pretty keen to get into all the action!

What did you miss most about Australia, and what are you missing most about the US?

Definitely missed all my family and friends, and of course Melbourne coffee! But it was hard to miss anything that was happening at home with Skype and Facebook.

I definitely miss the US more than I thought I would! I made some of the most amazing friends over there, and it’s so weird going from seeing them everyday to not knowing when we’ll see each other next! Getting back into full training at home, I’m really missing all the support I had a FSU. Apparently I have to pay for my own running shoes, travel, physio, massage and doctors now! It’s definitely very easy to forget this after being spoilt for the past four years!

And finally, have you picked up any Americanisms?

I guess maybe a few saying or terminology such as ‘workout’ or ‘practice,’ I have to bite the tongue to not say those! I’m also finding it really hard to think in kilometres in training again, my head has switched over to miles!

Well, it’s great to have you back in Australia and more importantly, back into the Athletics Essendon family! We’re all looking forward to seeing you build on the success you enjoyed in the US for the 2015/16 season! Thanks for sitting down with us!