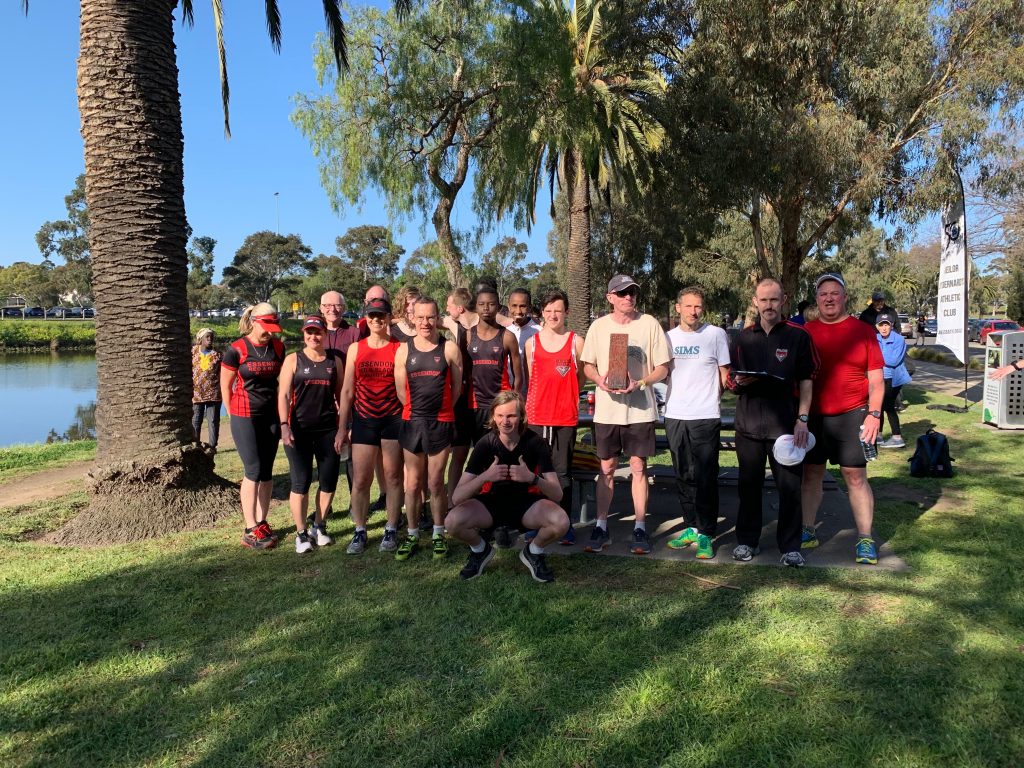 September 14 was a perfect day for running.  With a top temperature of just under 20 degrees and a light breeze, it was a pleasant Melbourne spring day on which to hold the annual Burke-Stobaus Relay Challenge.  Contested annually between Athletics Essendon and Keilor St. Bernards, this event honours both Bill Burke and Ron Stobaus. Bill coached at Essendon until 98 years of age, while Ron Stobaus currently coaches a large squad of athletes at Keilor – St. Bernards.

Athletics Essendon had four teams in the event, plus a couple of our runners combining to form a mixed team with Keilor – St. Bernards.  Our top team was made up of Damien Bruneau, Bashir Abdinoor, Jeff Jones and Brody Thrum.

Damien lead the team off.  After already having completed 30km in the morning, Damien was a little bit tired, but managed an excellent opening leg of 13.33 to give our team a 90 second lead over Keilor – St. Bernards.  Damien passed over to Bashir, who ran his lap in 14.01, continuing to extend the lead at the half way mark.

Jeff Jones was returning from injury, but ran pretty close to what he thought he would, completing the course in 16.36 and handing over to Brody Thrum to run the final leg.  In his first outing in this event, Brody brought it home in 13.28 being our fastest runner for the day.  The margin to Keilor – St. Bernards was around 3 minutes, with Essendon winning back the Burke-Stobaus trophy from Keilor St. Bernards for the first time in four years.

There was a contest within a contest between our 2nd, 3rd and 4th teams.  Christian Knox got team three off to a good start, running 15.39 for the lap and hoping this time would be fast enough to beat his coach Mark Carey, who Christian handed off to.  The experienced Aaron Heaney moved ahead of Justin McLaren, with Aaron handing off to Sunny Dor and Justin handing off to Jack Tat.

Carey must have known the target he had, as he clocked 15.38 to just edge Christian by 1 second.  Jack caught up to his training partner Sunny Dor, so we had a change of positions between those teams.  Jannik Ernst took over from Jack with Kim Cova taking over from Mark Carey and Megan Blackman taking over from Sunny.

In the third leg, none of the positions had changed, but Jannik Ernst had narrowed the gap on Kim Cova to set up an interesting finish for Don McLaren to chase down Glenda Morris.  Megan Blackman ran up to form and passed off to Danielle Stasinowsky.

Anthony McKew had run a good third leg after taking over from a KSB runner.  Anthony passed off to Peter Stead who took off a few minutes in front of Danielle.  There was a change of positions again in the final leg as Don McLaren brought team 2 back into second place.  Glenda finished not far behind him with Peter managing to hold off Danielle.

Thanks to Michelle Coates for helping out with the timekeeping and the other club members and family members who were there to support our teams.  Both clubs enjoyed the post event BBQ and the trophy was presented to President Mark Carey for our club to display in the clubrooms for the next 12 months.  Just like Australia retaining The Ashes recently, we hope to retain the Burke-Stobaus trophy in 12 months from now.

Thanks to Danny Hawksworth for this report