Athetics Essendon was represented at the World Masters Athletics Championships – Malaga, Spain by 5 of their best masters athletes, John Cooper, Mark Giglio, Mark Harper, Domonic Costello and Anna Kasapis. Our athletes represented themselves, their club, and their country with the highest of effort and performance.

See the below video for the action of the race.

Our athletes have documented their WMA experiences. We congratulate you all for your fantastic representation and perfomances!

Malaga is one of Spain’s 17 autonomous communities and is ideally located on the beautiful Costa del Sol (Like Sunshine Coast) with the waters of the Mediterranean Sea lapping its beaches.

With a friendly population of approx. 600,000, its climate is perfect for outdoor activities. Malaga has a wealth of history dating back nearly 3000 years, making it one of the world’s oldest cities.

With this background, Athletics Essendon were represented by 5 of its 40+ athletes.

Three were randomly selected to represent Australia at the opening ceremony; the officials asked that only 8 athletes from each country march into the opening….some how Australia decided we should all march. There was lots of talk from the officials but it all ended with smiles!

Malaga boasts 4 very good athletic centres, although the warm up areas could have been better. At Carranque you basically warmed up with people walking their dogs, while at the main stadium, the warm up area was underground.

Masters athletics starts from age 35 and goes on in 5 year increments. An athlete in M50 is a male between 50 and 54years 11 months.

For those who imagine that people so old as 35 can’t run or jump or throw, I’d invite you to check out the results at www.malaga 2018.

Mark was part of the Australian M45 4 x 400 relay which broke the 31-year-old Australian record while claiming gold.

Dom Costello ran the heats of the 100m (7th in 13.45) and 200m (7th in 27.06). Unfortunately, his on-going hamstring injury prevented him achieving his best but he was a great support to the other Aussie athletes.

It was a fantastic experience and we are all looking forward to Toronto in 2 years.

Mark Giglio had five events to contest at the World Masters Athletics Championships in Malaga, Spain: The M45 100m, 200m, 400m, 4x400m relay, and he was also entered in the M40 4x100m relay.He reached the final of each individual event (100m, 200m, and 400m) which meant running heats, semis, and final for each, a total of 9 individual races.  Reaching each of the sprint finals was not achieved by any other athlete in the M45 category.In terms of results, while he made the final of the 100m, 200m, and 400m, the large workload probably took its toll as he placed 8th in each.  He ran his Masters 100m PB of 11.60 on the fast Malaga Mondo track, the eventual 100m winner Jason Carter (UK) running a new European record of 11.01s.  The M40 4×100 relay team were unfortunately disqualified because of a bad baton change.The M45 4×400 relay saw Masters veterans and ex-Olypians Andrew Wilcox (AUS) and Mattias Sunneborn (Sweden) pitched in a rematch of their 2016 4×400 relay anchor leg.  The AUS team was rounded out by Australian pro runners Nathan Crowley (who skipped the individual 1500m to focus on the 4×400 relay) and Shane Ezard.  Mark took out the first leg and ran a faster split than his individual 400m.  The Australian team won the hotly contested final in a new Australian record of 3:30s, which broke the 31 year old Australian record from 1987 by 3s.

Overall it was a terrific experience with great camaraderie and team spirit.  Mark is hoping to rally his Essendon Team Mates for the World Indoors Poland 2019 and World Masters Toronto 2020.

Attending the World Masters Championships in Spain was such an amazing experience. My event was the 1500m and in the W40+ there was 60 competitors and the top 10 was extremely competitive with all of us with best times within seconds of each other. I won my heat on Saturday night and advanced to the final on the Sunday morning. Typical of championship racing it came down to a 200m kick down and due to lack of racing I didn’t have the legs. The race was won in 4.36 and I finished 7th in 4.40. 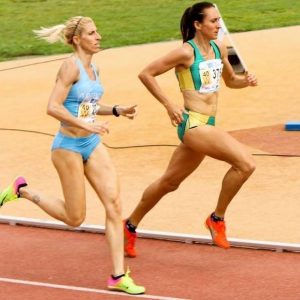 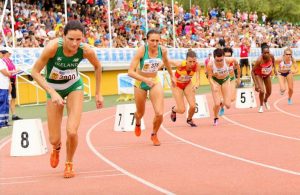 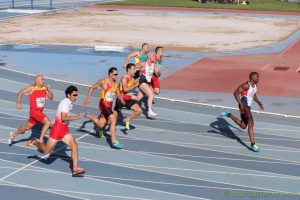 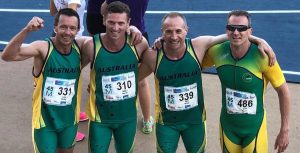 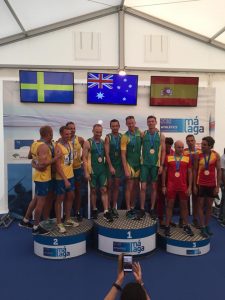 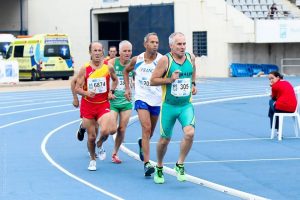 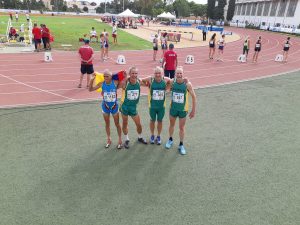 PrevPrevious Article16th of October – 50th Anniversary of the “Salute” for Human Rights – 1968 Olympics – Mexico City.
Next ArticleAV Shield Round 1 Report – Aberfeldie – 6/10/18.Next